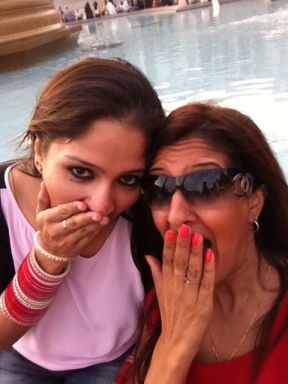 “I am like a barbequed chicken, swallow me with a glass of alcohol…” Confused?  This is the English translation from a line of one of 2013’s biggest Bollywood songs, Fevicol, and is a very much a family favourite at every other Indian wedding reception or birthday party. Sexual innuendos and suggestive lyrics in many of today’s Indian film songs may be a growing trend, however there is still an air of discomfort in British Asian families around the dreaded “S” word, as the struggle to downstream morals and maintain an open parent-child relationship continues even today.

With Valentine’s Day fever simmering down, I was interviewed by a few regional BBC radio stations on Sunday to share my views on whether British Asians are talking about relationships and its surrounding issues more openly, or if these were still brushed under the carpet.

As a first-born British Indian in my family, being able to even discuss dating on such a platform, in my own opinion, reflects an extremely progressive attitude from people of my parents’ generation, especially as there are still a large number of South Asian women and men born in the UK, whose marital future will be decided for them. A revolution in social media has resulted in dating and matrimonial websites designed specifically at British Indians searching for a partner, and singles nights events in every city have become the norm, tailored around our lifestyle choices.

Yet, conventional as this may be, the option to date, as and when it suits many independent working south Asians, who are busy juggling careers and a social life, is still an option with conditions. The typical defaults consist of dating with a view to marry (casual dating predominately frowned upon), dating a fellow Indian who also has a view to marry, and when it comes to discussing sex…? The less said the better?

Perception versus the reality of a couple dating or “courting” as my dad puts it, does not often run on a parallel route, especially as the physical aspect of a relationship is never discussed, based on the assumption that it’s non existent or not expected.

Last summer, I filmed a short documentary for a local arts group that showed the changing face of the British Indian woman through my own family tree. The thread of expectation was interwoven right through from my grandmother, born in a village in India, who had no say in her marriage at the age of 17, through to her own children, who were all expected to marry at the acceptable age to a “suitable” partner. Conversations about dating or even the prospect of having a boyfriend before marriage was unheard of, particularly in the rural parts of India.

Thirty to forty years on, people of my parents’ generation have strived hard to establish their identity here in the UK and give their children the best of what they themselves as children could not have. Yet in the midst of attempting to retain our roots and culture whilst adjusting to a western environment and ensuring we do not become isolated, conversations surrounding key relationship issues are often dismissed. Surely, even in India it wasn’t always taboo especially during my parents’ hey-days?

Back in the early 70’s, when Indian cinema was trending with a new generation of bolder sassier film stars, my mum was studying at a college in Bombay (now know as Mumbai), and witnessed this new phenomenon of fashion and idolism.

She specifically recalls, that for a short space of time, a safe sex campaign was being promoted across the city. Billboards on the streets and posters in the colleges were highlighting and encouraging the use of protection. But the campaign ended before it had even started and the seriousness of the underlying message was difficult for many people to digest. “Sex education as part of a biology syllabus was uncomfortable enough to even discuss with anyone at home,” my mum recalls, “so to throw in a bunch of posters amongst teenagers, most of whom are vocally supressed on this subject within their home was unexpected, but it was essential to highlight.”

Furthermore, this only provoked misogynistic views on how any woman participating in this form of activity was no less than an untouchable, because for an Indian woman to be accepted as a bride, an image of purity and virtue is a prerequisite. We are born into an enriching culture that places female deities on a pedestal, but ironically celebrate the historic moment when Lord Rama’s wife, Sita, whom he had rescued from his enemy Ravana, had to jump into a burning fire, to prove her chastity to her husband whilst she had remained captive.

Hence this cultural expectation of remaining virtuous and pure has remained tagged with the woman, and participating in anything deemed as “morally” unacceptable tarnishes this white veil we are meant to be kept under.

This inability to detach these traditional expectations from decisions men and women make as adults is a common conflict among British Asians. Making a choice that can potentially be seen as unacceptable automatically places women and men within the “uncultured” category within society, but my mum feels that for many parents it’s the easier option than trying to confront it.

When I travelled to India a year ago, to shoot a documentary on attitudes towards marriage and relationships over there, the parent-child crises were certainly parallel, but within cities like Mumbai, many working women of my age are already initiating steps to bridge this gap.

A young fashion blogger from Bandra, whose parents split when she was young, explained that the impact of being raised by a single mother had a positive effect on her own mother-daughter relationship. With a base foundation of trust and honesty, it was her mother that bought her protection. “There was no drama and it was an understanding between my mother and I, which no one else needed to know about.”, she explained.

Is it harder for parents living outside of India, who are continuously trying to retain a sense of belonging? “It’s not easy,” says one South Asian London mum of a 24 year old, “I never spoke about this with my own parents. But I’d rather know that at least I could contribute towards ensuring my child makes the right decision which it’s why it’s important to talk to your children about not just being safe but being respectful to another person’s sentiments.”

I know that there are many people reading this thinking, ignorance is bliss. It’s easier to uphold a wholesome image of how we should be portrayed, and to an extent it becomes highly difficult and uncomfortable to try and explain the complexities of an emotional and physical relationship where it has been unheard of.

Remaining in denial for one Indian couple , who both practised medicine in London however, had an unexpected outcome, when their teenage daughter came home pregnant. Aside from being oblivious that their daughter had been involved with anyone for so long, as practitioners the only place they failed to advise precaution in, was within their home. Although she was at the age of consent and probably well aware of the dangers of unprotected sex, without ignorance and maybe with guidance, the relationship between parent and child could have been that of honesty.

Just something to think about! In the meantime, I need to explain to my ever so innocent mum, why I keep cringing every time she decides to turn up the volume on Slumdog Millionaire’s Ringa Ringa.! Confused? You can look it up readers… Keep it clean…. We’re desis!!!

Listen to my interview on BBC Sheffield with Waheed Akhtar here