On a chilly Sunday morning, my alarm goes off much earlier than it should do. The self-inflicted hangover post the wedding of the year, that of my best friend, has decided to surface rather rapidly. I quickly glance at my hands where the colour of the henna is surprisingly deep, yet the small and slightly visible gaps of where the pattern is fading prompts a sigh for a moment as that niggling question, which most Asian parents are always thinking, appears at the back of my mind “will it ever be my turn.?”

That moment lasted 5 seconds, being single is the least of my concerns because in a few hours I would be making my way to the BBC studio to join a panel for International Women’s day with BBC Radio London’s Sunny and Shay. As a city worker, who writes features for South Asian magazines on social issues impacting British Indian women, and attempting to also document these experiences, it was a privilege to be able to speak on the same platform with Asian Woman Achievement winner Daman Kaur Mullhi, children’s book author Shweta Aggarwal and folk singer Kelly Oliver.

Sitting amongst these inspiring women alongside the lovely Sunny and Shay, we instantly warmed to each other yet were aware that we all wanted to know the answer to one question – when and how will the gender divide finally close?

Within the public eye and reach, celebrating women’s successes through mainstream media and networking is certainly one avenue of acknowledging the achievements of such motivating women. But are women encouraging each other or celebrating themselves enough? Are we too modest in our successes?

South Asian women in particular, have traditionally been raised in a culture, whereby they are often moulded into multiple roles, the wife, mother and homemaker, hence it’s often expected that multitasking is a pre-requisite as a personality trait. Whilst this trend is being diluted through generations, certainly from my own experience within social circles, personal and professional achievements can be almost dismissed because unless I have a ring on my finger, it’s assumed my life isn’t actually complete! (And yes that includes some of my married friends who suddenly have all the wisdom in the world!)

Is it easier to criticise women who are breaking the mould or striving for equality as a means of hiding our own insecurity or lack of encouragement from our own families. As spectators, we applaud the likes of Hilary Clinton or Malala as role models, but how much are we encouraging or even acknowledging the inspiring women within our own homes? What about those women who have sacrificed their dreams and aspirations without batting an eyelid for the sake of family and loved ones?

So for this International Women’s Day, I’ve decided to bring my inspiration closer to home, where the accomplishments of these women, is nothing short of moving. I was fortunate to have the opportunity to screen my documentary, The Evolution of the British Indian Woman as part of Kingston Connection’s Story festival. These films were an insight into their personal journeys, not just from India to the UK, but their continuing paths here in London. They shared their joys, sadness and how they overcame obstacles and found strength within their communities and above all, how they had evolved as British Indian women. 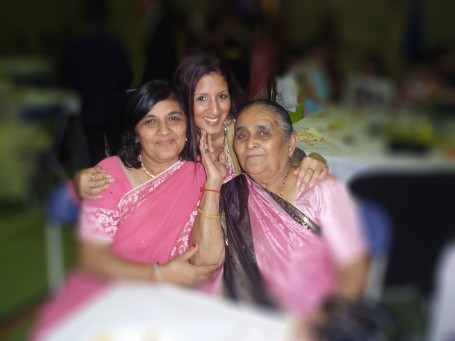 The journey of the Indian woman, my grandmother often told me, would be met with the expectation to be moulded into multiple roles, thus the preparation for these responsibilities, during her childhood, was installed in a woman’s mind from the moment she was aware of her own being. Now, at 82, and having lived here in the UK with her children and now grandchildren, for over thirty years, her tired eyes tell a different story.

My mother too, was commended for her self-motivation and aspiration to build an independent life in a foreign country. Defying social norms with an inter-caste marriage, her acceptance of letting go of relations that would never heal filled the audience with empathy, many who agreed, that this issue still exists for many British Asians in this country. Pushing the boundaries of her own strength, she received immense praise for her infinite efforts in wanting to give her own daughters the best start in life.

An individual’s past experiences often reflect the decisions they make today, and the emotional thread that interweaves within each of these generations from both my grandmother and my mum, is that of the importance of self-identity. So for this International Women’s Day ladies, celebrate the wonderful women that you all are, as you are! We all have something to contribute!

Watch the interviews below..

The entire event and media coverage can be seen at https://sejalsehmi.com/the-evolution-of-the-british-indian-woman/